Rocky relationships are sometimes very hard to turn around.  However, the first thing to notice is that you are both still there regardless to how rocky it is in the moment.   At times, it seems to steal the joy from your heart.  It really doesn’t matter the “reasons” that you have given yourselves for why it is rocky because the reasons are not the cause of the destruction.

Sleepless nights and worrisome days always accompany rocky conditions in a relationship.  What caused you to lose the vision you used to see for your lives together?  What was once experienced as curiosity turned into complacency. 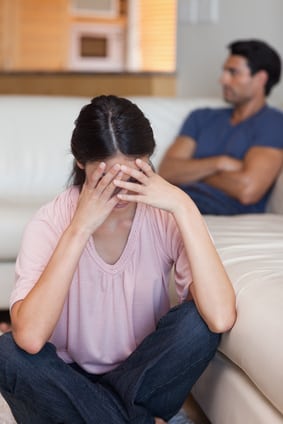 Do you really know why?  Why have you stopped daydreaming about what’s next?  These are tough questions to look at and generally the answer is the same, “I really don’t know,” or “He/she/we have changed!”  And guess what, it is TRUE.  Then I ask you what has brought about such a change?  Regardless to what you may reply, the answer is that you have both stopped being with one another the way you were once being when you fell in love.  It is clearly and absolutely the correct answer.  But guess what, I now have another question, (and I bet you knew that I would).  What is the reason that you are both being different?   That is the 54,000 dollar question.

In my own marriage, it is a clear as day the trouble we were headed for, and I had been there before.  Early in the the relationship, we seemed to resolve big things, but it was that little stuff that began to eat away at our relationship.  Over time, the little stuff got bigger and bigger until it appeared that everything was a big thing and none of it could be really get past us.
The thing I began to do was discuss with my friends how bad things were getting.  Of course the love of my friends was always there, with my best interest at hand, and they soon became my advisory board.  They knew how great I was and I really deserved better.  They couldn’t believe what all I was putting up with.  I created my own gossip panel of agreement through friends and before long within a few years my relationship was hanging over a cliff head for the deep dive.   Everything seemed difficult. The desire to be together was dead emotionally, and physically we began to move apart.  We stopping doing all the things that we did when we were growing our love for one another.  We had basically stopped feeding it, stopped watering it, and it was dying fast.
It was fairly early in my coaching career and one day as I stood in front of my workshop participants it was like a bolt of lightening stuck me.  For the very first time in my life I could hear what I was teaching others in my workshop regarding recapture of relationship and restoring love.  It was as if I was listening to someone else speak.  I could hardly complete the session I was in such shock about where I was living in my own relationship versus what I was teaching in the moment.  I could hear that how I was living my relationship was totally up to me and it didn’t have anything to do with my husband.   Suddenly, I could see that my perception was the cause of my actions and reactions to him.  That led me to my next reality check, one of the biggest “ah-hahs” of my life.  I could see that my relationship was playing out exactly how I pictured it.  It looked exactly how I said it looked.  It was as I said it was.

You may be saying, “Well, how could it be any different than that?”  Let me tell you this, if you never believe anything I share with you…. try to believe this, your reality follows exactly what you say it is and so did mine.

This was one of my biggest “download” of insight that I ever received.  It turned my life around and has done so now for all these years.  My relationship is filled with curiosity for one another, time to listen and be together, eagerness to be together each day and the joy of having one another.  From the rocks to the riches in love, respect, and appreciation for one another.  It’s not hard and it does take a new state of awareness.
When you started the relationship you are in, did you plan for it to fall on the rocks?  I would guess not!  Is your relationship not yet to that point?  Then don’t let it get there!
There is a way to prevent it. Changing your perception requires an awareness other than the one you have today.  Plan your relationship to live in RICHNESS!
Posted in Blog, Relationship and tagged appreciation, awareness, love, marriage, on the rocks, perception, problems, relationship, richness, rocky, worry