In the days before I became a father to my adopted children, I had a job that I just loved, but I had some fears about whether I was working enough.  I had to prove myself to others that I was indispensable, worthy of being paid to do the work. I believed that if I worked hard enough, I could enjoy rest without feeling guilty. I felt guilty about taking breaks during my work shift, so much that I worked straight through my lunch on a regular basis.

My self-care suffered.  As I became more stressed, it got harder to switch my brain out of work mode.  I started needing more time in the evenings to unwind before my thoughts could quiet down enough to let me sleep… this led to me not getting enough rest.  I became preoccupied with what I thought I would have to get done tomorrow.  I would wake up groggy… became more distracted at work.  It snowballed into a vicious cycle of spiraling downward. 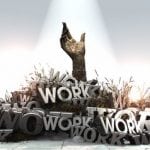 When I left my job to become a full-time stay at home dad, do you think I stopped worrying about being seen as lazy?  No, in fact, I transferred my fears over to my new job: taking care of my kids and our home.  I put my own work under scrutiny, criticizing myself for taking too much time with my self-care.  I figured that if I got the dishes done, the endless piles of laundry taken care of, and the finances handled, then that was barely being productive enough.  If I didn’t finish my chores by the time evening came, I stayed up to do as much as I could before I hit my breaking point and crashed for the night.

I wanted my partner to think I was doing my job, especially since he was working hard many hours, nearly every day in the week.  If I didn’t complete what I was supposed to get done, I felt guilty for being lazy.  I felt I was not supporting him or my family as much as I should be.

Then my internal fighting became worse.  My partner would notice when I didn’t finish the dishes or the laundry.  Even though his requests were matter-of-fact and reasonable, I felt defensive.  I couldn’t hear him without feeling like I was being personally attacked for not picking up the slack.

One day, I decided I had enough of this vicious cycle that I was putting myself through.  After a couple eye opening coaching sessions, I discovered what was behind the unhealthy relationship I had with my work.  Once I got to the root cause of my beliefs about what I perceived about not doing enough, not holding up my part of the agreement, I finally realized I could choose to become free of my fears.  I released myself from the constricting hold of my self-expectations.  It was a unique freedom I had never felt before.

Now I can say I am at peace with my responsibilities.  If I don’t do everything that I’m supposed to do, I am okay with it.  No longer did I have to have a reason to justify the times when I didn’t complete all my work before the end of the day.  As I cultivated more compassion for myself, I noticed I developed more compassion for others for not finishing their work.  As a result, my work became more enjoyable for me… it is such a treasure to celebrate this renewed passion for my work.  Anyone can have passion for and enjoyment of their professional and domestic work… it is truly a matter of choice.