If you’ve read an article on self-help or heard a personal development speaker, you’ve probably been exposed to the idea of positive thinking. This is the belief that “thinking positive” will somehow change your circumstances, your identity or your business.

It sounds good in theory. You may have even heard, “If you change your mindset, you can change your life.”

But the problem is that…

Positive Thinking is Limited by Your Belief System

The impact of long-term negative thinking can affect your overall well-being. Scientist have discovered that negative energy is far more powerful than positive energy. It has a much bigger impact than you realize.

Carol had been an alcoholic for years. She wanted to stop drinking and mend the relationships in her life that had been affected by her alcoholism. She read self-help books and started listening to personal growth podcasts. Again and again, she heard about the importance of positive thinking.

For about two months, it seemed to be working. Carol resisted the temptation to drink. She bypassed the wine aisle when she went grocery shopping. She didn’t stop by the bar after work. She left social events where she was tempted to drink.

But eventually, Carol found herself drinking again. Now, she was bitter and angry. She didn’t understand why her positive thinking hadn’t cured her alcoholism or made her life easier. 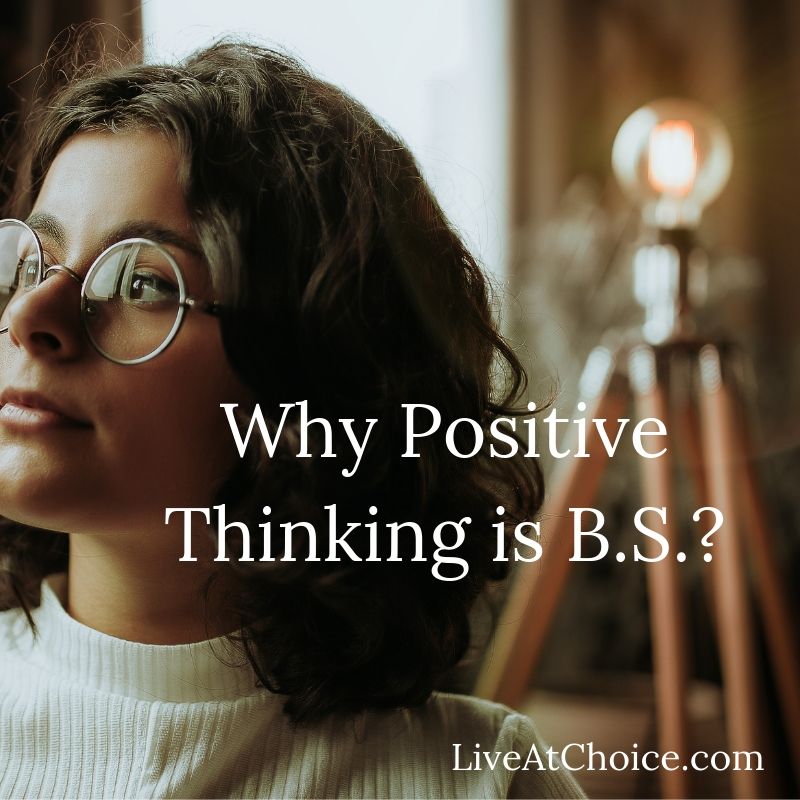 The Failure of  Your Positive Thinking is Not Your Fault

Like Carol, you may have believed that positive thinking was enough to overcome an obstacle or problem in your own life or business. Maybe you thought you could heal your marriage, find a career you love, or start your own business if you only had enough positive thinking.

Just like the diet industry profits from the failure of millions of consumers, the self-help industry profits from your failure to change your life. As you keep buying books, attending seminars, and trying to smile through it all, you feel more and more like a failure or a fraud. You begin to suspect you don’t have what it takes to succeed. You doubt your marriage will ever heal. You’re not sure if you’ll be able to start that business.

Positive Thinking Is a Band-Aid®

Think about a young child who falls down and scrapes their knee. Mommy rushes over and comforts the child, saying, “It’s all going to be better. Let’s get a Band-Aid®. We’ll put it on and everything will be better.”

What you may not realize is that you’re the child in this scenario. Self-help represents the Band-Aid®. Of course, you already know that a bandage can make a child feel better but it doesn’t solve anything. The problem is simply out of sight.

It’s the same concept with positive thinking. You’ve hidden the real problem so you think things will get better now. Except they don’t and doubt begins to creep in. Negative thought patterns, which have been in place for years, begin to emerge.

The self-doubt represents the edges of the bandage. If that Band-Aid® comes off, it’s going to hurt again. But now, you’re already doubting whether the bandage is going to protect you.

Before you know it, you just rip the whole thing off because it’s hanging there. Then you retreat back to the same old thoughts. These old thoughts can be comforting but it’s an illusion. You only feel comforted because it’s familiar and your expectations will be met.

You can ‘think positive’ in the short-term. But there’s always a limit on how far it can take you. Suddenly, you feel worse. You thought you were past this and you begin mentally beating yourself up. You say things like:

Now to escape the terrible feelings of failure, you say that positive thinking doesn’t work and you try to avoid it. You feel more hopeless and dejected.

The truth is you can’t think your way to a mindset change. You need to go much deeper than positive thinking allows. You have to re-wire those negative thought patterns and that requires some in-depth work.

But you don’t have to tackle this problem alone. I created a special FREE webinar called “How to Get What You Want When Positive Thinking Just Ain’t Cutting It!” that will help you release the bandage and get to the root of your struggles. This webinar is going to show you…

Sign Up Today (But Only If You’re Ready to Give Up the Band-Aids®!)

Posted in Mindset and tagged beyond circumstances, positive thinking, self development