It can be tough to put yourself out there in your business. You’re competing against what feels like the whole world. Whatever your job type or industry is, it probably seems like there are already too many players, so you find yourself wondering if you should even bother pursuing your dream.

But if you’re constantly afraid of your competition to the point where you give up before you even start, you’ll never fully know what you’re capable of. What a shame that would be.

If you’re feeling this way, all you need to do is stop comparing yourself to your competition.

It doesn’t matter what other people are doing, it only matters what you are doing. Yes, sometimes your competition is better than you—but almost assuredly because they’ve been at it longer. You have to know who you are and what you want and keep your goal and plan in focus, no matter who you’re up against.

Last year I crossed something off my bucket list—I ran a 5K. For whatever reason, I’d never been good at running, so it was a significant goal for me. In that 5K, just like in a lot of other things, there were a lot of unexpected head games when it came to competition. Preparing yourself for them is vital.

I had only started jogging a couple months before the race, and I knew a slow pace would be key. Coming out of the gate, everyone was running, including me, the jogger. Without really noticing, I was trying to keep up with the pack; thank goodness I realized my mistake almost immediately.

If my goal was zero walking, I had to dial it way back. I didn’t know I would be so inclined to stay with the group, and I was glad I had made a plan in advance I could stick to. Trying to match my competition would hurt me instead of helping me.

Much of my time out there I was alone. There were lots of people ahead and some people behind (many of who continued to pass me). I felt awkward and embarrassed about not running at the same speed as anyone else.

Soon, I started noticing that I was getting close to people who had stopped to walk. Every time that happened, I thought, “Wow! See? They started too strong! I did the right thing!” Then as I got close behind them, they took off running again. I was thinking, “Are they telling themselves that their only goal is to be faster than the slow lady behind them??”

I kept reminding myself, “This run is only about me. No one else.” I had to believe that the same was true for them—their run was only about them, and they may not have even known I was there. But if they did, and I was helping them to dig deep and not let anyone pass them, then I was glad. I started cheering them on in my head. “You can do it! Keep pushing!”

Why should this be about my frustration when it could be about their success?

Around the two-mile mark my efforts started paying off. I realized that I was legitimately starting to pass people who had passed me early on. I was so proud! They had pushed too hard too early, but I had done what was best for me. My hard work and control were finally paying off. I kept repeating the mantra of “slow and steady wins the race.” (OK, maybe it was more like “finishes the race.”)

As I saw the finish line, I started thinking about making a mad dash at the end. When I really understood what I was planning, I thought, “Hey! Do you realize that you’re not talking about IF you finish but HOW you’ll finish?! That means you know you’ve done it! Congratulations!” I spent a little while reveling in that before I bolted across that glorious finish line.

Ultimately, I came in around the back of the middle of the group, which was fine by me. I not only met all my goals, I learned a great lesson about the importance of preparedness and keeping a positive attitude. And by the way, I came in at 35 minutes, 22 seconds—my best time ever. When it comes to your goal, make sure you understand your definition of success and have a plan to get there. 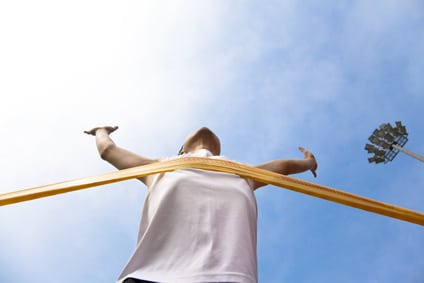 Your only true competition is with yourself, and you may find that YOU are your biggest challenge.

When you find someone in your field who is more successful than you, be happy for them. Cheer them on. Don’t wish them ill; be proud for all the hard work they put in. Take that opportunity to see what’s possible for you.

Keeping a good attitude about your competition speaks volumes about you, and your coworkers and customers will notice. Also, you don’t know what opportunities may lie ahead for you and your competitor. He or she might be a good mentor, boss, or partner.

People are very diverse; they have individual talents, interests, wants, and needs. By understanding that others’ paths are not, and cannot be, the same as yours, you can see how their success will not derail yours.

The people around you are not a threat to your ego, your relationships, or your business unless you make them one. If you leave fear behind, you are free instead to lift them up and help them on their journey.

This doesn’t have to be a dog-eat-dog world when it comes to your business. In fact, the more we do to help each other be successful—in every way—the more successful we become.