Money issues are often cited as one of the leading causes of why relationships and businesses fall apart, we experience stress or we feel like failures. Money can even be a source of discontent between parents and children.

Having too much month left at the end of the money is tough enough—so who needs to have your life compounded with the stress, upsets and frustrations that come with these conditions?

•  Yelling or the silent treatment
•  Ignoring the issue, and hoping it will go away
•  Feeling alone in the sinking ship
•  Allowing business decisions to be driven by fear
•  Feeling like a lousy parent because you can’t give the best to your kids

When you are stuck in these conditions you can’t see your way out.

I once worked with a couple because their relationship had gotten into trouble. They were having major outbursts of anger, and their daughter had begun to shut down and not engage with them because she was sick of all the arguing.

This couple believed their anger was over money. They had been in their relationship for over 11 years, and for almost that entire time they had been unable to discuss money—instead, they just blamed each other for their financial condition. Each of them handled money differently and had different values around money management.

Shortly after they were married, they stopped talking about money because one partner had simply agreed to take care of the other. Over time, that person grew resentful around the inequitable sharing of money and how it was spent while the other didn’t appear to care about helping when it was obvious they weren’t making ends meet and their credit scores were going down the drain.

This couple’s money communication issues went on for so long that they were unable to overcome the anger, which then inserted itself into issues that had nothing to do with money, creating a severe disconnect in their partnership.

What they did not know was that the condition of their relationship wasn’t caused by the money or lack thereof. During our coaching session, both came to realize that they were ignoring their money issues because of something very deep-seeded in their belief systems. As we began to uncover what these beliefs were, they could see what had really almost destroyed their relationships with each other and their daughter.

These hidden beliefs even kept them from seeking the help they needed to better educate themselves on money management, savings, debt, retirement and financial freedom. Once I showed them how to be free of these limiting beliefs, they were immediately different with one another—full of compassion, reconnected at the heart as if they had never fought and open to true communication about their financial situation.They even repaired their relationship with their daughter. 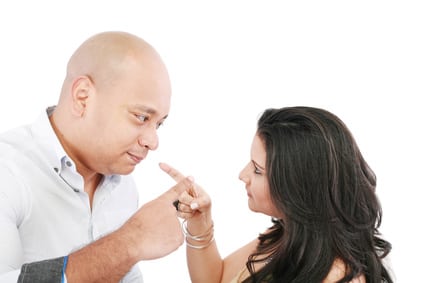 Just like this couple, your money problems can be resolved when you truly discover what is going on behind the anger, fear and anxiety. It’s not the money that causes the pain in your life, it’s the beliefs about yourself and your values that keep you locked in the cycle.

Freedom from the beliefs will allow you to understand your spouse or partner, come clean with your fears, and be able to take the action necessary to have money work in your life now and in the future.

So, if money isn’t at the root of the anxiety you’re facing, what is?

Take some time to explore what beliefs are underneath all the negative feelings you’re having. For example, do you have a belief that money is bad? Use these questions as a guide for working toward finding your hidden beliefs.

•  When does the anger, anxiety or fear crop up for you? What thoughts generate it?
•  What incorrect assumptions might you be making about how your spouse or partner sees money?
•  Think about your money values—WHY do you have them?
•  What fears or frustrations are really the source of your anger? What beliefs are driving these?
•  Think about your first experiences with money as a child, and perhaps about how money seemed for your parents—you may find clues there.

If you find that going through this process is difficult for you, I’m happy to help! Learn more here about how to uncover what’s causing your anxiety and be free of it so that your relationships and money finally work.

I wish you the best!